One could be forgiven for thinking that they were trespassing into The Dior Collection exhibition, held at Proud Central, London, from the 7th Feb – 7th April 2019. Quietly situated a close walk from Charing Cross station down a side street, The Dior Collection is held in an intimate, cosy, peaceful gallery space away from the bustle of the city, and other fashion devotees currently on fashion pilgrimage to the capital for the Victoria and Albert Museum’s Christian Dior: Designer of Dreams exhibition. In comparison to the V&A, Proud Central feels like a hidden gem undisturbed by overwhelming crowds.

Proud Central’s The Dior Collection, is an exhibition of fashion photography showcasing garments from the House of Dior, including garments designed by Christian Dior himself, to his protégée Yves Saint Laurent, to Marc Bohan. The photographs, taken by Norman Parkinson, Bert Stern, Horst P. Horst, Mark Shaw and Jerry Schatzberg, offer a view into the world of haute couture, from slick editorial shoots, to photographs of Dior and his models inside his exclusive atelier.

The gallery space is small, with white walls, and photographs mounted in black frames, spaced apart according to photographer and size. Text panels provide contextual information, provenance and pricing (the prints are for sale). Perhaps the availability of more space dedicated to the photographs (if any extra could be sourced), and the addition of more contextual information, could improve the exhibition as a whole for a wider audience. More context could provide more meaning and symbolism to the photographs on display. When visiting the exhibition alone, one can really concentrate on the content of the photographs. For a satisfactory experience, I would advise visitors to avoid peak times and visit during quieter periods due to the intimate size of the exhibition.

This photograph, taken by Bert Stern for Vogue in June 1962 at Hotel Bel-Air, features Marilyn Monroe in a backless Christian Dior Haute Couture dress designed by Marc Bohan. Titled ‘The Complete Last Sitting’, this session is known for being Marilyn’s final sitting before her death of barbiturate overdose only six weeks later.

Stand-out pieces such as Stern’s photograph of Marilyn Monroe, ‘Looking Over Shoulder (1962),’ and Shaw’s ‘Dior Gown with Fur Hat (1954)’ are hung separately for symbolic and iconic impact. Other photographs, such as Schatzberg’s series of images from a 1960 Vogue studio shoot, are grouped together as a collection of outtakes, inviting the viewer into the shoot and the world of fashion photography, as models pose around the studio in woollen suits and dresses. Schatzberg’s images offer the viewer to explore the complexities and dimensions of the fashion industry during the 1960’s; outtake images make the collection feel more spontaneous and playful in comparison to the more stylised photographs displayed within the gallery. 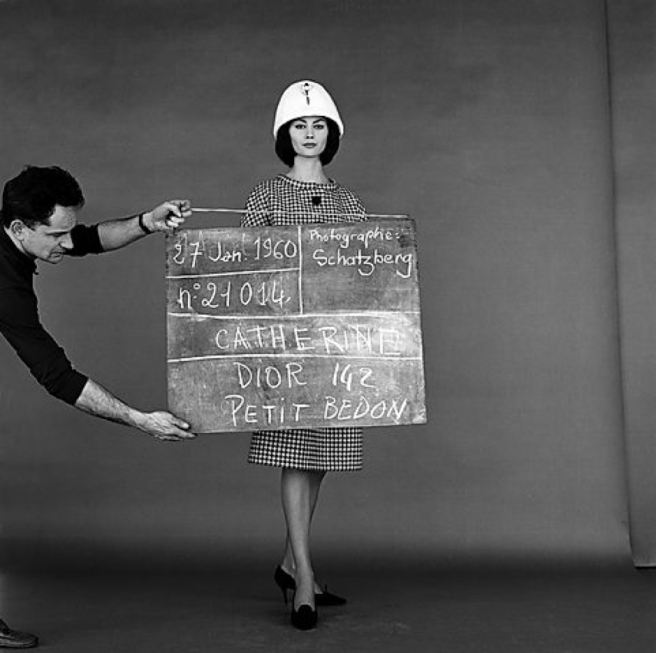 An outtake from Jerry Schatzberg’s shoot for the March 1960 issue of Vogue. The caption for this suit, named the ‘Petit Bedon’, reads “Dior- one of those marvellous little everything suits that this house turns out as effortlessly ascharm.”

Shaw’s images hang towards the end of the gallery; various photographs can be viewed of models such as Victoire wearing the ‘Zaire’dress from Dior’s Autumn/Winter 1954 collection. These photographs are particularly personal; text panels reveal that Shaw was trusted by Dior and was frequently invited into the designer’s studio to document fittings. As well as capturing models within the studio, a series of photographs from Shaw see him transcend from photographing within the studio, to capturing models wearing Dior within the privacy of their own homes, such as his image of Gitta Schilling in 1960’s, which featured within the pages of Life Magazine. A further photograph depicts Dior standing proudly with thirteen models at the Grand Salon during 1953. Dior was a highly superstitious man, consulting the advice of a fortune teller throughout his career as a haute couturier. Dior insisted he always had thirteen models at hand when presenting his collections. Not only does Shaw capture Dior’s new collection, but equally his own personal beliefs which Dior continued to follow throughout the rest of his career.

Parkinson’s lively images towards the centre of the gallery depict designs by YSL as the Dior silhouette transformed from Dior’s ‘New Look” to the slim waists and flowing skirts synonymous with YSL, who was dubbed by the fashion press as ‘The Little Prince of Fashion.’ Images such as ‘Coming (1958),’ depict models such as Nena von Schlebrügge posing down an alleyway wearing a Dior coat. Such images document Parkinson’s penchant for taking couture out of the studio and into the street, juxtaposing models dripping in expensive and desirable couture designs with urban scenery. Curator Oriole Cullen within the chapter Fashion Illustration and Photography, writes that ‘Parkinson’s images broke class barriers bringing the working class into the arena of high fashion previously occupied solely by the upper echelons […] as 1960’s British fashion took its lead from the street.’[1] Such photographs capture Parkinson’s technique, whilst indicating that the House of Dior had to continuously reinvent itself as the high street became an increasing influence over the fashion industry.

Model Wenda Parkinson, captured by her husband Norman Parkinson in Paris for Vogue. Wenda wears an outfit designed by Christian Dior himself, featuring Staron silk, worsted and a velour hat.

This photograph was taken in London for Vogue by Norman Parkinson. It captures model Nena von Schlebrügge in a coat by Christian Dior from Yves Saint Laurent’s first ever collection for the label.For his first collection, YSL stepped away from Christian Dior’s signature figure featuring a slim waist and flowing skirt. Instead, his designs hid the curves of the body under a smooth and fluid silhouette. The collection was an instant hit with critics.

Despite the limited space and content, The Dior Collection is worth seeing, not simply because it provides photographic context to the much larger Dior exhibition at the V&A museum, but because it acts as a retrospective to the photographers that feature within the exhibition. The scope of The Dior Collection does not simply depict Dior couture worn by various models in different scenarios, but traces the industry of fashion photography itself during the early years of Dior’s conception, documenting the transformations of the House of Dior as a different designer worked at its helm. The free exhibition is a hidden treasure for any Dior or fashion connoisseur currently visiting or planning a trip to London.