During the Belle Epoque era, a young, feisty entrepreneur emerged. Her name was Lucile; and her mission was to create couture for a new kind of a woman. A British designer, Lucile was arguably the first female to receive international recognition for her sartorial creations.

Entirely self-taught, Lucile became a dressmaker working from her home in Mayfair, London during the late 19th century. She was already divorced, with a young daughter, yet her business was a success and she opened a dressmaking salon during 1898, located at 17 Hanover Square. This was completely unheard of for a young single mother, yet Lucile was determined to let her business grow. 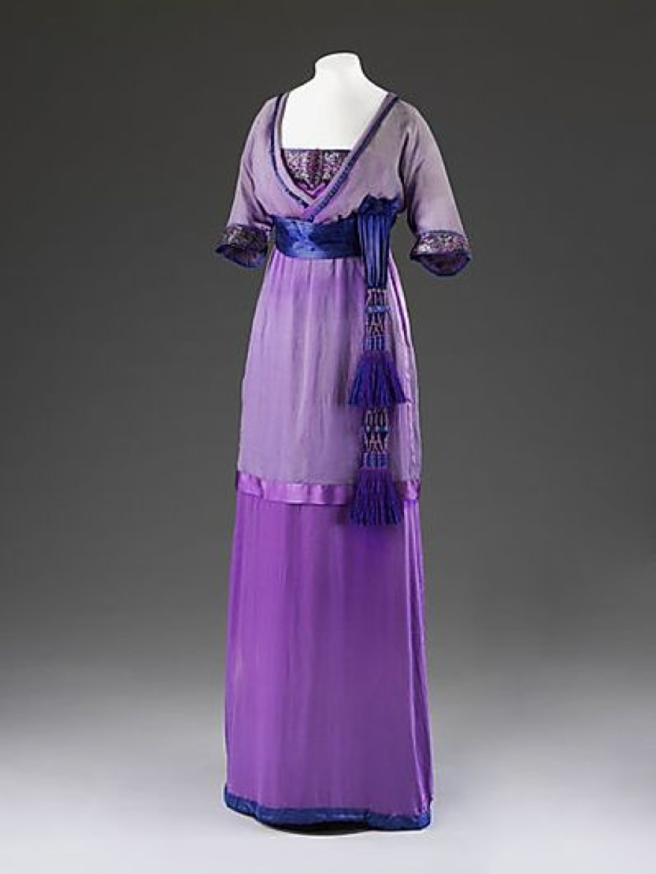 After two years, Lucile remarried a baronet, becoming Lady Duff Gordon in 1900. By 1905 she had moved to 23 Hanover Square, and by 1915, she had three other international couture houses operating in Chicago, New York and Paris. She became the It girl who mingled in all the major social scenes. 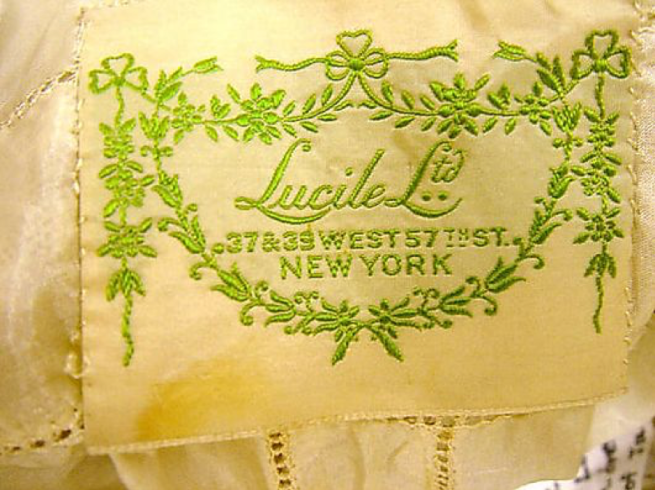 Lucile was known for her slender, un-corseted designs, adorned with delicate embroidered flowers and ribbons. She used satins and silks, with nude and transparent fabrics which at first shocked her customers and the press. They soon learned to love it – crediting her with originally and praising her for the independence she showed from the mainstream Parisian fashions. She created private rooms within her salons for customers to view her designs with discretion and privacy. It is said that her earliest customers hid their purchases within brown paper bags when leaving her premises! 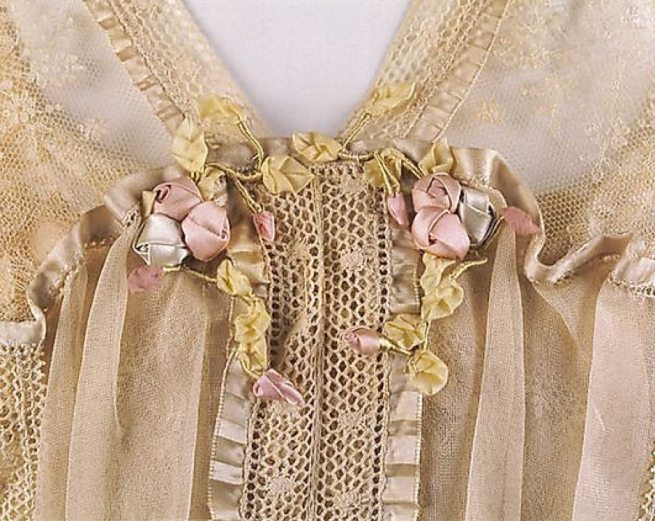 1978.288.1a, b. Close up of Lucile dress. 1916-17. Silk and cotton. The Metropolitan Museum of Art, New York. The crochet and use of romantic flowers make the dress even more delicate. 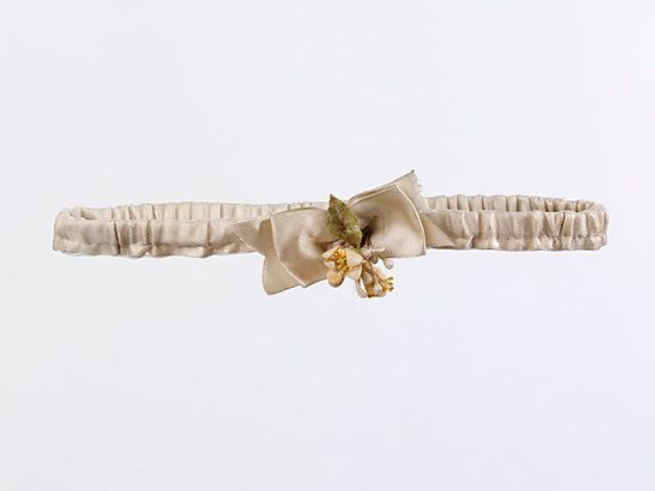 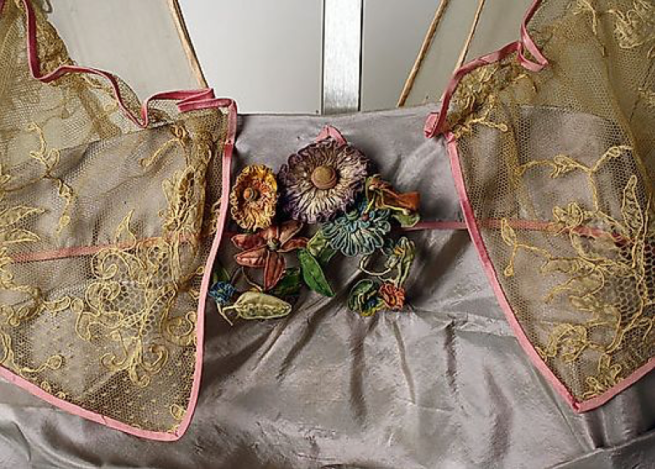 She dressed stars and royals alike; socialites such as Heather Firbank and Lillie Langry both wore her designs. Actresses and dancers on the stage including Sarah Bernhardt and Lily Elsie, and prominent figures such as Margot Asquith purchased Lucile’s garments. Both the Queen of Spain and Princess Alice were also followers of Lucile’s work. Incredibly innovative and business savvy – Lucile lured a wealthy clientele through her use of the ‘mannequin parades’ held at her London salon. Clients attended shows held within charming surroundings, watching live models present their clothes whilst being served tea and cake. As Lucile wanted – women were persuaded to buy more as they watched these catwalk shows. 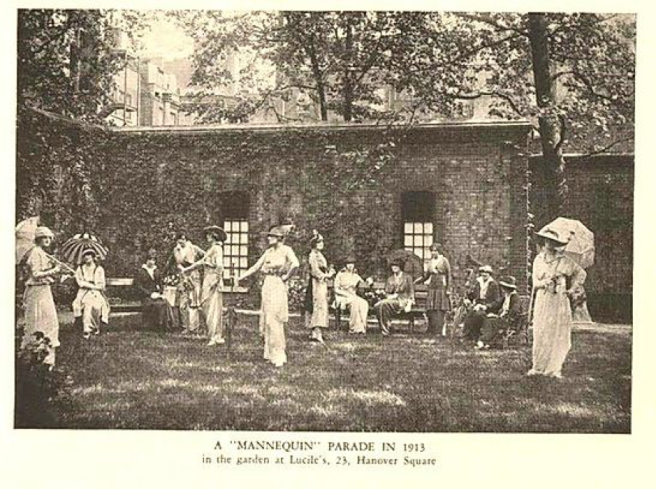 A photograph of Lucile’s famed “Mannequin Parades” in London, c1913.

But it wasn’t all sweet and successful for Lucile. Boarding the ill-fated Titanic voyage in 1912, Lucile and Duff-Gordon were caught up during the sinking of the ship. Both survived, in a lifeboat which was largely empty, with rumours circulating that Duff-Gordon had bribed crew members to keep paddling and not to return back to the shipwreck in order to retrieve survivors. Duff-Gordon was scrutinised and the subject of the national press. He retreated into solitude for the rest of his life. Lucile however was undeterred – continuing to reinforce that the couple was innocent. 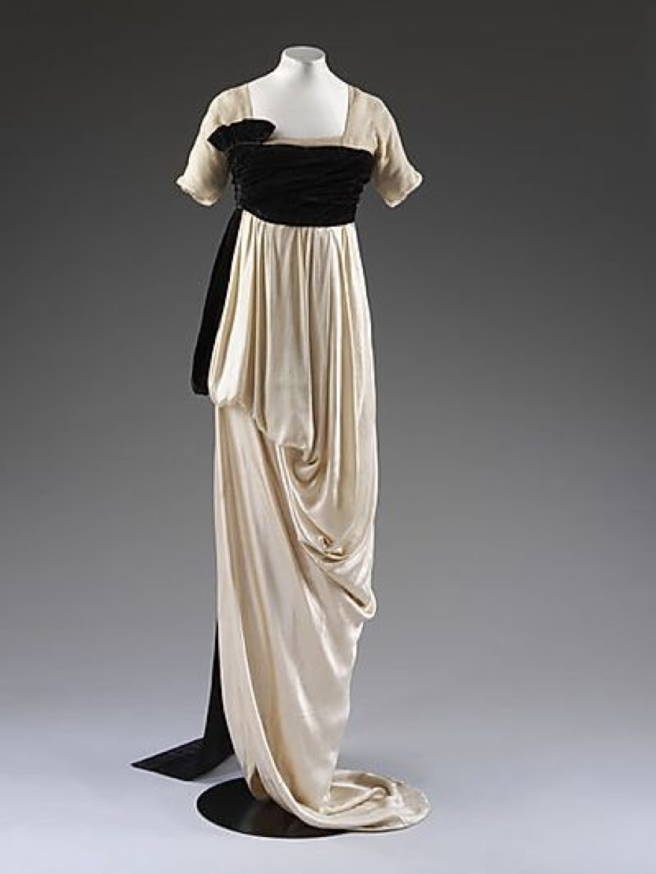 She continued working after the scandal up until the early 1920’s. The Belle Epoque era had ended – sportswear was in – and only one female seemed to dominant the fashion scene of the 20’s – Chanel. Times were changing, and the luxurious and superficial styles that Lucile had become synonymous with were falling out of fashion. Minimalist, tubular, shorter, and modern fashions were now in – Lucile was out. She continued to write several editorials for publications such as the Daily Express after her design career had ended. Facing bankruptcy throughout several of her businesses, and various lawsuits surrounding design copyrights and commercial endeavours, Lucile died almost penniless at a nursing home in London during 1935.

What I love about Lucile is the glamour of her lifestyle and determination to succeed. Unconventionally divorcing from her husband early, already with a young daughter in tow, Lucile achieved acclaim from the brightest of fashion magazines and companies; Vogue, Harper’s Bazaar, The Illustrated London News, Sears, and Roebuck & Co. 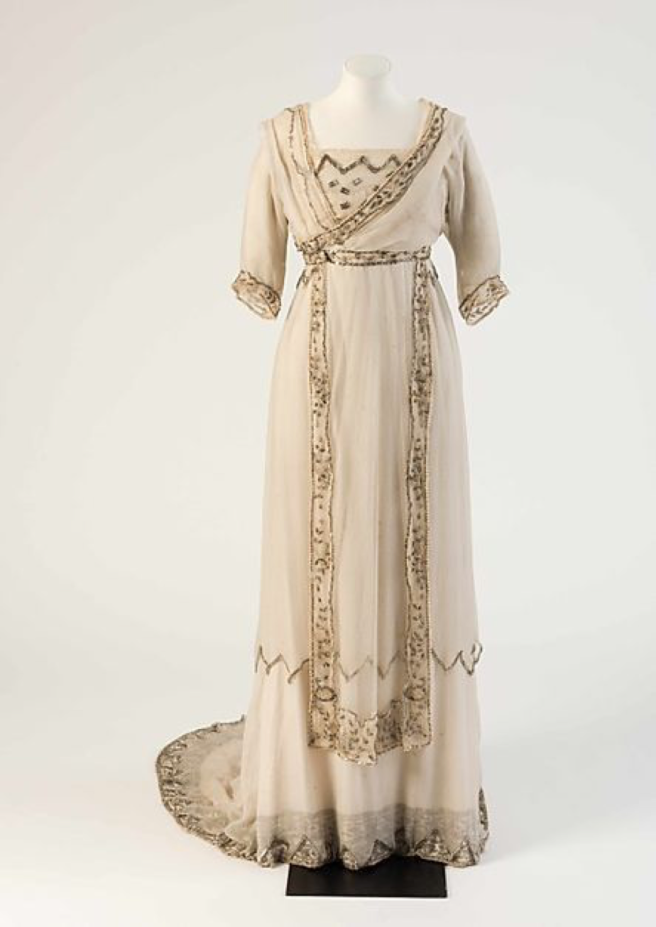 Although considered outdated once the 1920’s came around, Lucile provided provocative garments for her clients and pushed forward new ideas surrounding the presentation of femininity. She proved that lingerie could be just as classy and successful as the couture industry, and by using clever marketing, Lucile became one of the first and most successful British designers of the early twentieth century.